Known for its dramatic limestone karst hills and sleepy local villages, Yangshuo County is one of China’s most picturesque countryside town. In Yangshuo, visitors can experience lively local cultures, rich history and many outdoor recreations.  It is also one of the safest towns to visit. Our 3-day suggested itinerary is designed to show you the best Yangshuo has to offer and what are the things you can accomplish. Depending on your interests and travel priorities, you can certainly mix and match destinations, activities, and attractions to create your own itinerary.

Things to know before traveling to Yangshuo County:

Language – Standard Chinese and Mandarin Chinese are the official languages of China. In Yangshuo, people speak the Yangshuo-hua dialect. Although they have their own distinct language, most people in can speak Standard Chinese and Mandarin Chinese. Learning the language is not necessary, but speaking at least some Chinese phrases or attempting to learn is greatly appreciated by locals. It’s also good to know that many people can speak a decent level of English.

Currency exchange – Chinese Yuan (also known as Renminbi) is the official currency of China. Exchanging money is easy and follows the same standard to elsewhere in Asia. You can exchange currency at the airport, hotels, malls, local banks, and money changers throughout Yangshuo. ATMs are plentiful, and most of them accepting international credit cards and debit cards, so it’s easy to withdraw your money in CNY. Credits cards are commonly accepted in most mid-range to high-end restaurants and hotels.

Getting there – Yangshuo County is located northeast of China’s Guangxi Zhuang Autonomous Region. Its geographical location is great because of its proximity to Hong Kong and Hanoi, Vietnam. Traveling by air is possible via the Guilin Liangjiang International Airport, which is connected with most major cities in China. The Guilin Airport also caters to international flights from Hong Kong, Macau, Japan, South Korea, Singapore and Thailand. Once in Guilin, you can travel to Yangshuo via the Li River cruise, direct buses or trains.

Where to stay – There are many types of holiday accommodation in China, whether you’re looking for luxury hotels to cheaper accommodation like youth hostels and bed and breakfast. In Yangshuo County, most hotels/hostels options are located in Yangshuo Town. The most frequent question from first time travelers is, “What’s the best area to stay in when visiting Yangshuo?” Without a doubt, the best area to stay in is the Yangshuo Town to get easy access to most attractions and to get more hotel options. If you want to stay in a hotel with spectacular views of the mountains and Li River, then you can choose Yangshuo Mountain Retreat or Li River Retreat.

Hotel to consider in Yangshuo County:

Assuming you have taken an afternoon or evening flight to Guilin Liangjiang International Airport from any major cities in China, then you won’t be able to explore yet. Take a bus or train to Yangshuo County. Then, make your way to your chosen accommodation in Yangshuo Town. Have dinner at one of the local restaurants then get a good night sleep so you have energy for a whole day of adventure the next day.

Anyone who have ever visited Yangshuo will probably tell you how beautiful the countryside is. On your first day, embark on a bike ride through the stunning countryside of Yangshuo. You can either do this trip on your own or join a small-group tour from Yangshuo Town. Whichever of two given alternatives, this trip will allow you to see Yangshuo’s most famous scenic attractions like the Li River, Dragon River, small villages, verdant hills and rice fields. 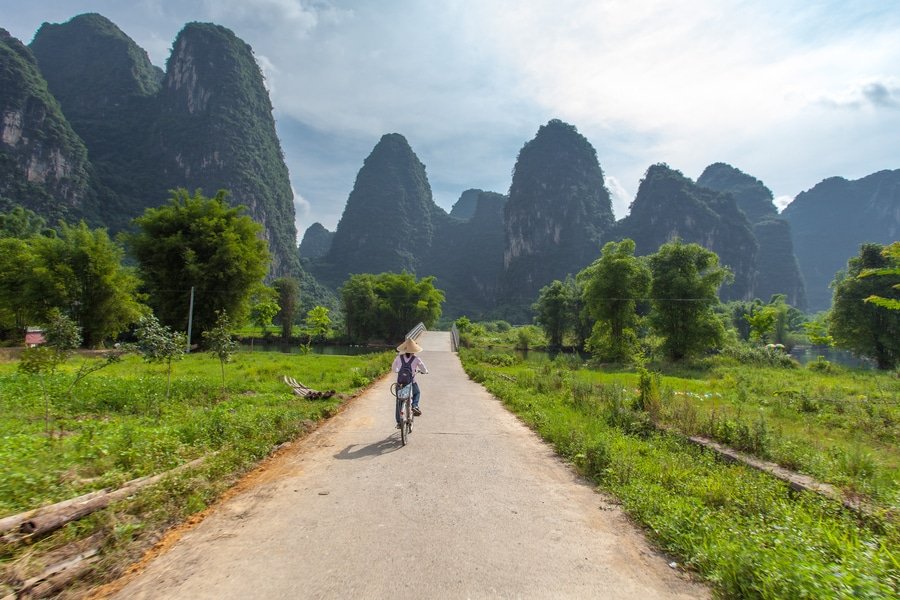 Don’t miss to join one of the many bike tours that are offered around Yangshuo (Gil.K / Shutterstock.com)

In the evening, do not miss to watch the Impression Sanjie Liu Cultural Performance, one of the top-rated activities in Yangshuo. Set on the magnificent Li River, this night show allows you to experience the natural beauty of Yangshuo whilst being introduced into the myths and legends of the ethnic minority. Aside from the awe-inspiring landscape you will see during the show, you will be able to witness world-class performances and their surreal reflections in the river.

On day 2, after a filling breakfast, get ready for another bike journey through the Ten-Mile Gallery, the picturesque section of Yangshuo County leading up to the Moon Hill. The journey starts outside Yangshuo Town along the Kangzhan Road. Then, you’ll pass by at least 6 scenic spots – the Totem Ancient Trail, Butterfly Spring Park, Big Banyan Tree, Assembling Dragon Cave, Golden Water Cave and lastly the Moon Hill. Make sure to bring a paper map with you or save digital map in your smartphone before you embark on this trip. 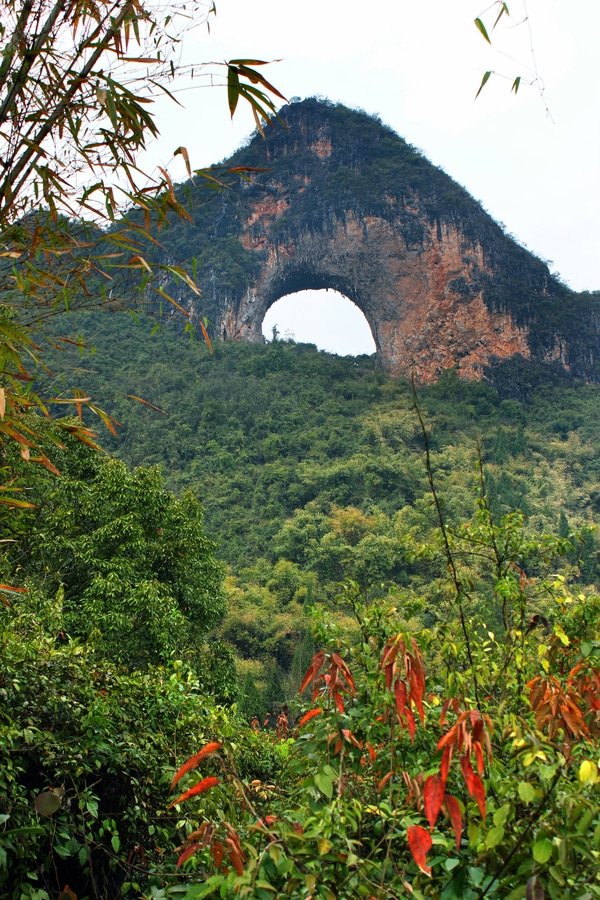 Yangshuo Moon Hill is named after its moon-shaped arch that is one of the highlights in Yangshuo (Andrii Zhezhera / Shutterstock.com)

In the evening, join a tour that allows you to witness cormorant fishing in Yangshuo. For centuries, cormorant fishing has played a vital role in the history of ethnic minorities on the Li River. This traditional fishing method uses cormorants to catch fish. After the trained cormorant catches a fish, it returns to the boat where the fisherman removes the catch from its mouth. The cormorant will be rewarded after the fishing activity. 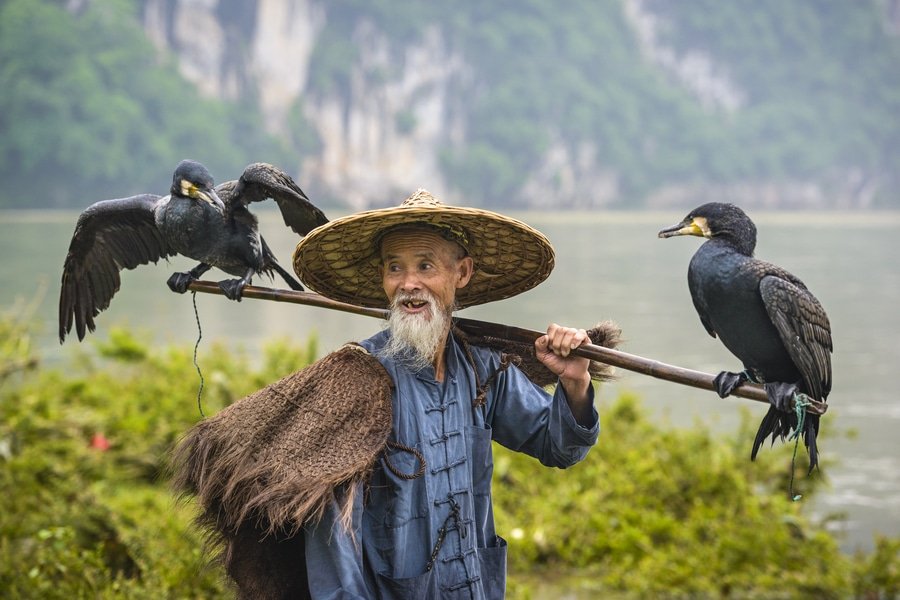 Cormorant fisherman and his birds on the Li River in Yangshuo (Sean Pavone / Shutterstock.com)

Your final day in Yangshuo can be spent on last-minute shopping and seeing those attractions that you haven’t yet had time for. If you still have time before departure, treat yourself to a delicious meal at one of Yangshuo’s best restaurants. You could even squeeze in some souvenir shopping before you travel back to Guilin or other parts of China.

Have you been to Yangshuo County or anywhere else in China? Do you have any tips or suggestions to share? If so, you can leave your comments below. 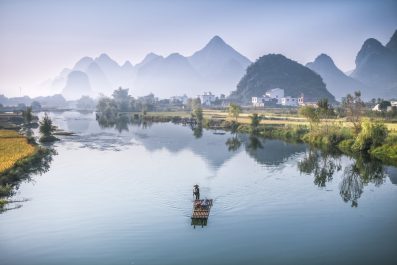