Out of this world views in the Kingdom of Bhutan

12 months ago
Where Would You Go
Asia

People who have been to Bhutan say the country is the jewel of the Himalayas. Thanks to hundreds of years of isolation, sustainability and environmental preservation efforts of the government, Bhutan maintains one of the most intact ecosystems in the world. It is one of the most varied habitats which serve as home to a rich array of animal and plant species. Geographically speaking, the Kingdom of Bhutan is made up of extremely diverse terrains thus it is a photographer’s paradise. In this 5-day suggested itinerary, you will see most of Bhutan’s key attractions. There are of course numerous other destinations in this small country so you might want to mix and match the suggestions below to create your own itinerary.

Things to know before traveling to Bhutan:

1. Tours – The Bhutanese Government has strict controls on the number of foreign visitors it allows into the country; thus independent travel is not allowed except for a limited number of travellers mostly for political, business or educational purposes. It is impossible to get into the country without hiring a private tour company that will arrange your tour as well as hotel reservations. There are, however, plenty of tour operators to choose from so it is advisable to do your research on where to book.

The minimum daily package for tourists travelling in a group of 3 persons or more is as follows:

USD $200 per person per night for the months of January, February, June, July, August, and December.

USD $250 per person per night for the months of March, April, May, September, October, and November.

For inclusions and limitations, visit the official website of Bhutan Tourism at www.tourism.gov.bt. Tours are indeed expensive but you can definitely customise it to fit your preference. What you can’t expect is backpacker-style travel.

2.Where to stay – The tour company chooses the accommodation for you, which most likely is a three-star hotel. If you would like to splurge a bit, you can always request for a four or five-star hotel for an additional fee.

The Druk Air flight from Kathmandu to Paro provides the most dramatic view of Himalayan scenery of any scheduled flight (snag a window seat on the left if you can). Look for the impressive Bodhnath stupa to the north as the plane takes off. Soon a continuous chain of peaks appears just off the left wing. The captain usually points out Everest (8850m; a black striated pyramid), Makalu (a grey chair-shaped peak) and Kanchenjunga (a huge massif), but if you have trekked in Nepal and are familiar with the mountains you can pick out many more. The elusive Shishapangma (8013m) is sometimes visible inside Tibet. Other recognisable peaks are Gauri Shankar (7185m), with its notched shape, Cho Oyu (8153m), Nuptse (7906m), with its long ridge, Lhotse (8501m) and Chhamlang (7319m).

When you pass Kanchenjunga, look for the dome-shaped peak on the western skyline. That is Jannu (7710m), which some French climbers have described as a ‘peak of terror’; the Nepalis have renamed it Khumbakarna. Once past Kanchenjunga, the peaks are more distant. This is the Sikkim Himalaya; the major peaks, from west to east, are Chomoyummo (6829m), Pauhunri (7125m) and Shudu Tsenpa (7032m).

As the plane approaches Paro you may be able to spot the beautiful snow peak of Jhomolhari (7314m) and the grey ridge-shaped peak of Jichu Drakye (6989m). The plane then descends, often through clouds, banking steeply into the wooded valleys of Bhutan. Depending on the approach pattern that day, you may see Taktshang Goemba and Paro Dzong as you descend. Paro airport is often described as the scariest airstrip in the world but it’s really not that bad.

If you are already in the area (Northern India) than there is Plan B – getting there by land. Foreign tourist can enter Bhutan by land at two points:

Phuntsholing, Southwest Bhutan – The town on the Indian side of the border is called Jaigaon and it is located in West Bengal. Technically speaking, there is nothing that deserves your time in Jaigaon so if you need to spend the night in the region, do so in Phuntsholing. The distance from there to Paro is 160 kilometers (100 miles)  and it takes about 4 hours by car.

Samdrup Jongkhar, Southwest Bhutan – This should not be your first choice unless you are already in the the Indian State of Assam. Paro is 480 kilometers (300 miles) away and the drive to Paro takes more than 10 hours. Nearest airport in India is Guwahati (there is a direct flight to Paro that costs about 200 USD each way).

4.Language – Official language of Bhutan is Dzongkha, which is derived from Tibetan. English is used widely in most areas, especially in hotels, souvenir shops, tour agencies and rent a car companies. Speaking at least some Dzongkha phrases or attempting to learn is greatly appreciated by the locals. Some helpful phrases are as follows:

5.Money and costs – The Bhutanese Ngultrum is the official currency of Bhutan. ATMs are aplenty within all main towns throughout Bhutan, where money can be withdrawn using MasterCard or Visa. Credits cards are commonly accepted in most mid-range to high-end restaurants and hotels. If you have cash on hand like USD, it is recommended to exchange in the airport because the exchange rate is the same as in the banks in town.  Please also note that the banks in Bhutan do not accept dollar notes printed prior 1996 and USD 50 or USD 100 are given better exchange rates.

Your adventure in Bhutan starts today! Take a flight that arrives in Paro International Airport as early as possible. Upon arrival at the airport, you will be received by one of the representatives of your chosen tour company and you will be transferred to your assigned accommodation in Thimphu, the modern capital town of Bhutan.

Check in to your hotel and rest for a bit. Start your first day by indulging in a traditional Bhutanese breakfast. Most hotels provide meals buffet-style but if you would like to try something different then you can head to the town center. Afterwards, soak in some of the highlights of Thimphu, including Buddha Dordenma Statue and Takin Sanctuary. Your guide will also share some interesting facts about the capital and its famous attractions. If your arrival happens to be on a Saturday or Sunday, then you can ask your local guide to take you to the weekend market. It will surely give you an excellent introduction to community life of the people of Bhutan as well as an opportunity to mingle with them.

For one of the most memorable breakfasts you’ll ever have, wake up to a sumptuous meal in your private room. After breakfast, meet your local guide for the continuation of your Thimphu cultural tour. Begin your tour at Memorial Chorten, the stupa built in memory of Bhutan’s third King, King Jigme Dorji Wangchuk, who is regarded as the Father of Modern Bhutan. Then, visit the Simtokha Dzong (literally means “Atop a Demon”), built by Shabdrung Ngawang Namgyal to consolidate his domain and subdue the demon. If you are interested in ancient Buddhists texts and manuscripts, then you can visit the National Library before lunch.

After lunch, visit Tashichho Dzong (knows aslso as Trashi Chhoe Dzong), the beautiful medieval monastery which houses the throne room of his majesty, the King of Bhutan. If you would like to see how traditional thangka paintings are done, then you can ask your guide to take you to the Institute for Zorig Chusum, more commonly known as Arts & Crafts School.

On day 3, visit Punakha Dzong (meaning the Palace of Great Bliss), built in 1636 by Zhabdrung Ngawang Namgyel, the founder of Bhutanese state. It is arguably the most beautiful dzong in Bhutan thus, his majesty and other members of the Royal Family frequently visits. Please also note, you will not be allowed entry if you don’t have the necessary permits so check with your guide before visit. Punakha Dzong is quite big and there are a lot of interesting sights so you would probably spend the entire morning here. In the afternoon, check out of your accommodation in Thimphu and travel to Paro. En route, see some of the attractions like the Simtokha Dzong, the oldest fortress of the Kingdom which now houses the School for Buddhist studies.

Get up before dawn and see the sun rise over the Himalayan Mountain Range. As the sky glows red, the Himalayan glaciers will reveal itself first in silhouette and then in all its immense glory. Enjoy your breakfast at the hotel before you start your day excursion to Taktsang Monastery view point, more popularly known as “Tiger’s nest”. This monastery is perhaps the most famous attraction in Bhutan and is considered as the holiest according to Bhutanese people.  Legend has it,  the Guru Rinpoche (the Second Buddha) flew here on the back of a tigress, who is said to have been his concubine. Finding shelter in a series of caves, he meditated inside and then set about converting the Bhutanese to Buddhism.

The hike is not going to be easy as it will take 2 hours and half to reach the monastery, including lunch stop at the half-way point. Riding a horse is also an option if you feel like hiking could be very difficult for you.

After 4 whole days of adventure in Bhutan, allow yourself a full day to recover and just spend your time wandering through Paro’s nearby attractions. Hop a flight back to Thailand or India for your international flight back home. If you still have time, you can stock up on souvenirs at Paro. Some of the most common souvenirs you can buy in Bhutan are traditional gho and kira (Bhutanese clothing), thangkas (silk paintings), carpets, colourful masks, Dzi beads, jewelries, bamboo handicrafts and a lot more. Please also note, souvenirs and pretty much everything in Bhutan is much more expensive compared to India, Nepal or its other neighbouring countries.

This is the end of our 5-day suggested itinerary. You may extend your vacation for as long as you prefer or until you get to see all attractions that interest you. Take time to meet the locals, sample the best Bhutanese dishes or even try archery. If the pace gets too hectic, then reorder your sightseeing priorities. Happy travel!

Have you been to Bhutan? Do you have any tips or suggestions to share? If so, you can leave your comments below. 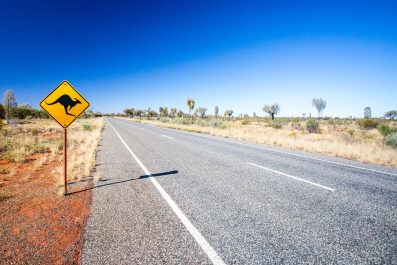 The Northern Territory of Australia