Known as one of the world’s best capitals of art, Madrid remains as one of the top cities to visit by every traveler. Its beautiful golden sandstone architecture, world-class cuisine, laid-back Spanish charms and youthful vibes are some of the reasons why Madrid is one of Spain’s top tourist destinations. If you’re a first-time visitor, with only 3 days, planning the trip and narrowing down the itinerary can be a daunting task. With our suggested itinerary, your visit to Madrid will be much more relaxed, and you’ll get a greater sense of the diversity of its landscape, food, and people. You can absolutely make any changes you like to adapt the tour to your preferences.

Things to know before travelling to Madrid, Spain:

Currency exchange – The official currency of Spain is the Euro (EUR), the same currency now used by most Western European countries with the exception of the United Kingdom, Switzerland and Norway. Exchanging money in Spain is easy and follows the same standard to elsewhere in Europe. The best way to get local currency (Euro) is to use the ATM and withdraw in Euros to get the best rate. You may also transact with Banks and Bureaux de change.

Getting around – Madrid features an extensive public transport network consisting of trains, buses, tourist buses, metro, and taxis. The center of the city is a fairly compact area which can be explored on foot or on a bicycle. You can bike on your own and enjoy one of the guided biking tours offered in the city. If you see yourself traveling often using the public transpiration, then it will be useful to have a Tourist Travel Pass (choice of 1, 2, 3, 5, and 7-day passes), which will give you unlimited travel on buses, trains and the metro in Madrid Zone A (Madrid City only).

Where to stay – There’s a great variety of accommodation in Madrid, ranging from small family-run pensions to five-star luxury hotels. In almost any neighborhood, there’s something for every level of comfort and budget. If its your first time in the city, it is recommended to stay in Puerta del Sol, which is considered the symbolic center of Madrid, to get easy access to the city’s famous attractions and get plenty of accommodation options.

Hotels to consider in Madrid:

Only You Hotel & Lounge

Everyone’s first stop should be Museo Nacional del Prado, the main Spanish national art museum. Dedicate at least 2 hours in this museum and enjoy viewing the works of some of the greatest European masters like Francisco de Goya, Diego Velázquez, Raphael and Peter Paul Rubens.

Your next stop is Madrid’s Plaza Mayor, which is one of the most beautiful central squares in Spain. Here, you will find the Baroque-style Casa de la Panadería (El Ayuntamiento de Madrid), which is the municipal government of Madrid. Make sure to grab some Bocadillo De Calamares (calamari sandwich) while you’re in Plaza Mayor. Just a short walk from here you will find the Baroque-style Church of San Isidro el Real built in the 17th century.

In the afternoon, once you are through with the old square and churches, take a stroll in Mercado de San Miguel, located next to Plaza Mayor. Housed in an old historic building, the market boasts a great selection of seafood, meats, cold cuts, cheese, among others. If you’re on a budget, it’s the best place to get your food for 3 days. For dinner, celebrate your first night in Madrid at Restaurante Sobrino de Botín (Calle Cuchilleros, 17), the oldest restaurant in the world and a personal favorite of Ernest Miller Hemingway.

On Day 2, head for the Gothic-style Catedral de Sta Maria la Real de la Almudena (Almudena Cathedral), the seat of of the Diocese of Madrid. Your next destination is Retiro Park (Parque del Retiro), the largest park in Madrid and one of the most beautiful parks in Spain. It’s the best place to people-watch or if you just need a peaceful retreat from the city.

After lunch, make your way to the Museo Nacional Thyssen-Bornemisza (Thyssen-Bornemisza Museum), located in Paseo del Prado near Museo Nacional del Prado. This museum exhibits the fascinating history of Madrid and houses a vast collection of historical paintings from the world’s most famous painters. Once you’re done with the museum tour, head to the Royal Palace of Madrid. Because of its monumental architecture and historic relevance, we recommend joining one of the guided tours offered in the city. Audio guides are also available in various languages for those who would to explore the palace DIY-style.

With time remaining, go for a stroll through Puerta del Sol. In the evening, do not miss to try the traditional tapa bars and stand at the bar while eating tapas and drinking lager beer. Visitors will surely appreciate Madrid’s unpretentious bar scene and vibrant nightlife.

You can dedicate Day 3 for Complutense University of Madrid (Universidad Complutense de Madrid), one of the oldest universities in Spain and the world. Founded in the 13th century,  the university was originally named as Estudio de Escuelas Generales de Alcalá before it got changed to its current name in 1499. Biking around the university is a great option which allows you to enjoy the area at your own pace. Check out its central courtyard, classrooms and art galleries. Squeeze in some gourmet product shopping at Mercado de San Antón before you head back to your hotel and prepare for your departure.

Have you been to Salamanca or anywhere else in Spain? Do you have any tips or suggestions to share? If so, you can leave your comments below. 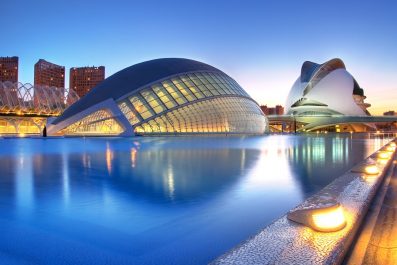