Explore the Charming City of Verona, Italy in 3 Days

Made famous by the legend of Romeo and Juliet, Verona is a city rich in history and culture, enough to be declared a UNESCO World Heritage Site in 2000. In three days, you can take in much of Verona’s beauty and get the feel for how great it is to explore the city. Our suggested itinerary is designed to allow you to visit the city’s most famous attractions. Read on for suggestions on how to make the most of your time in Verona.

Things to know before traveling to Italy:

Language – Italian is the official language of Italy.  Most Italian in the city and other main tourists spots, speak English so you can absolutely get by without speaking Italian language. Like other countries, speaking at least some Italian phrases or attempting to learn is greatly appreciated by the locals.

Currency exchange – Italy uses euros, the same currency now used by most Western European countries with the exception of the United Kingdom, Switzerland and Norway. Prior to traveling, you can buy some euros (enough for one day or whatever your preference) and then exchange your money in the banks to get the best rates. You can also use the ATMs (called bankomat) at all main squares of every town, major airports and train stations.

Getting around – Although Verona is small enough to explore on foot, there are also plenty of other ways to get around. Biking is the most popular way to get around the city. If you are on a luxury vacation, consider hiring a driver to take you around. This option is expensive but will give you complete control of the trip. Taxis are also great alternative but keep in mind that this option is also expensive.

Where to stay – Verona is awash with various accommodation options with something for every level of comfort and budget. The most frequent question from first time travelers is, “What’s the best area to stay in when visiting Verona?” Without a doubt, the best place to stay in Verona is the historic center, which is situated in the middle of everything.

Where to stay in Verona:

Day by Day Itinerary: Explore the Charming City of Verona, Italy in 3 Days

On your first day, take in a few of Verona’s most famous attractions and get an introduction to its rich history. Upon arrival, check into your chosen accommodation. Then, join a small-group bike tour of Verona. You may also rent a bike and explore the city on your own (check Bike Verona for bicycle path maps and up-to-date prices). Biking is an extremely popular activity among locals and tourists as it has several physical advantages. It is also a great way to see the city without spending too much money on transportation. Don’t forget to go to the tourism office (Via Degli Alpini, 9) to purchase a Verona Card (18 euros for 24 hours and 22 euros for 48 hours), which gives you access to the city’s main attractions. Some of the landmarks you can visit on this day are Via Mazzini, Piazza delle Erbe, Torre dei Lamberti and Casa di Giulietta.

For over a hundred years, Arena di Verona (Roman amphitheater) transforms into an open-air opera theater every summer. If your travel date happens to be from June to August, then you can watch a ballet or opera in the evening. This large- scale opera is very famous, so to avoid disappointment, make sure to buy your tickets ahead of time. For performance schedule and ticket prices, visit their official website.

If you are a catholic and your second day happens to be on a Sunday, rise early and head to Basilica di San Zeno Maggiore (Piazza San Zeno, 2) to attend a celebration of the Mass. Situated on Piazza San Zeno, you will also find Church of San Procolo (Via Massimo D’Azeglio, 54), a small church standing adjacent to the Basilica. Non-catholic visitors may also visit the Basilica from 3 to 6 PM to learn about its history and appreciate its interior.

After your Basilica mass or tour, make your way to Museo di Castelvecchio, a medieval castle used as a military stronghold built in 14th century. When it was bombed during the World War II, the architect Carlo Scarpa restored the remaining castle and transformed it into a museum. If you are a fan of the tragic love story of Romeo and Julie, then Tomba di Giulietta (Juliet’s Tomb, located at Via del Pontiere, 35; Admission is free with Verona Card, otherwise it costs 6 EUR) should be included in the itinerary. Located underground of the convent of San Francesco al Corso, the vault is said to have been where Juliet was buried. Also not to be missed is Porta dei Borsari, an ancient Roman gate which dates to the 1st century AD. End your day at Piazza delle Erbe.

Start your last day in Verona by going to one of the best morning hot spots in the city serving classic caffe Italiano. Caffe Borsari (Corso Porta Borsari, 15d) serve some of the best coffee and croissants in Verona. After breakfast, head to Piazza dei Signori, the former center of power in Verona. There are plenty of former government offices in this area like Loggia del Consiglio, Casa della Pièta, Palazzo del Governo and Palazzo dei Tribunali (the court). Before lunch, make your way to Arche Scaligere (Scaliger Tombs), the 5 Gothic funerary monuments for the city’s most significant leaders. The afternoon can be spent on last-minute shopping and seeing those Verona attractions that you haven’t yet had time for.

Have you been to Verona or anywhere else in Italy? Do you have any tips or suggestions to share? If so, you can leave your comments below. 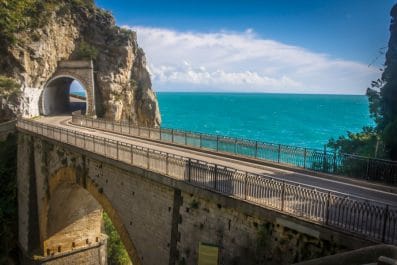 Discover the Amalfi Coast of Italy in 3 days

3 days in Chengdu, China – so much more than the giant pandas